A TRADE4SD team carried out an online survey of project stakeholders designed to understand the relative importance experts place on differing aspects of sustainability and their prior expectations of interactions between international trade in agri-food and sustainability. In doing so, aspects of economic, social and environmental sustainability received focus in the light of the effects of: a) further trade liberalisation and b) the shock of Ukrainian war.

The survey was organised in three rounds. The first round focused on stakeholders’ priorities in respect of pillars of sustainability – economic, environmental, and social, the second one tried to reveal their opinions on a range of more detailed attributes of each of the three pillars, and the third round was designed to investigate whether their priorities and concerns had changed due to the shock of Ukrainian war, a shock which hit part way through the exercise. Additionally, comparison of the views and priorities of stakeholders working in EU countries and the opinions of stakeholders in a developing country were analysed. Vietnam, as one of the EU trade partners countries participating in TRADE4SD was used as a case study.

Responses about the effects of trade were more nuanced. Concerning the effect of further trade liberalisation both groups unanimously perceived that the effect on environment will be negative and greenhouse gas emissions will increase. On the positive side, the EU stakeholders claimed that trade would increase productivity, help better distribution of factors of production, and allow countries to exploit their comparative advantage. Some stakeholders, however, were more cautious; they raised concerns that trade may lead to price volatility and price distortions as well as result in threats to local food security for those in developing countries. The Vietnamese respondents believed that trade would increase wealth, income, and efficiency in the use of resources. Yet, some stakeholders claimed that trade would widen inequality between the North and South of Vietnam (a net consumption and a net production area respectively) via unfair trading or pricing of commodities.

The following chart shows a comparison of responses from the EU and the Vietnamese stakeholders in the second round of the survey. 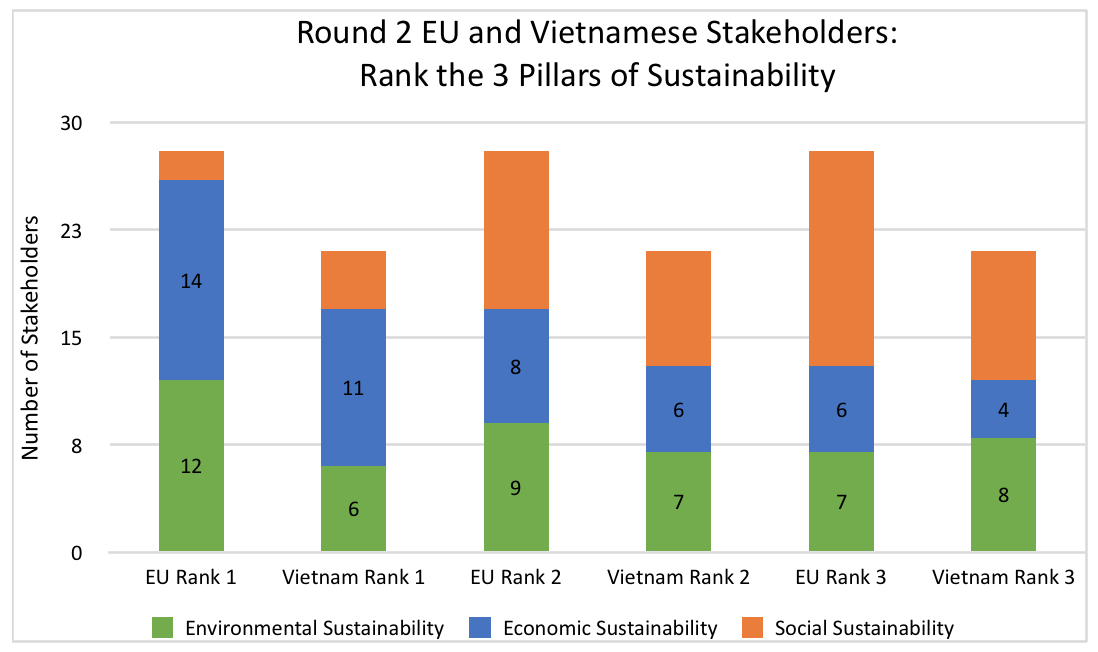 As the chart illustrates, both the EU and Vietnamese stakeholders ranked economic sustainability as the most important pillar. Within the economic pillar, they listed as crucial attributes; agricultural profitability, per capita income, and maintenance of economic growth.  Under the pillar of environmental sustainability, both groups perceived water access and water quality as essential aspects. However, EU respondents thought biodiversity was one of the most important attributes, whist Vietnamese stakeholders prioritised greenhouse gases and land use for agriculture. Both groups indicated that societal stability was the most important aspect under the pillar of social sustainability.

Concerning the impact of Ukraine war, half of the EU respondents claimed that SDG 16 Peace, Justice and Strong Institutions and SDG 2 Zero Hunger would be most affected by the war. Prices and food security were thought to be the most exposed to risks emanating from the war at a global level. A high proportion of Vietnamese respondents changed their pillar rankings in the face of the war resulting in the environment now being considered the least important pillar in place of the social pillar at the bottom of their priorities. Like the EU stakeholders, the Vietnamese respondents perceived SDG 16 Peace, Justice and Strong Institutions to be the most affected SDG by the war. Most stakeholders ranked the food security and prices as being at highest risk at a global level due to the war. Two third of stakeholders claimed that food consumers in developing and European countries would be most negatively impacted by the war.

TRADE4SD research on priorities and concerns about the interaction between trade and sustainability will continue with a study of public opinion on the issue in selected countries.

Environmental Impact of Agri-food trade liberalization on different groups of countries: do stakeholders have a good intuition?The EU’s proposed reforms to Trade and Sustainable Development chapters: a big change, or more of the same?

How do we foster the positive linkages between trade and sustainable development?

Environmental Impact of Agri-food trade liberalization on different groups of countries: do stakeholders have a good intuition?

The EU’s proposed reforms to Trade and Sustainable Development chapters: a big change, or more of the same?

The influence of non-trade policy on trade – Renewable Energy Directive

We use cookies on our website to give you the most relevant experience by remembering your preferences and repeat visits. By clicking “Accept All”, you consent to the use of ALL the cookies. However, you may visit "Cookie Settings" to provide a controlled consent.
Cookie SettingsAccept All
Manage consent

This website uses cookies to improve your experience while you navigate through the website. Out of these, the cookies that are categorized as necessary are stored on your browser as they are essential for the working of basic functionalities of the website. We also use third-party cookies that help us analyze and understand how you use this website. These cookies will be stored in your browser only with your consent. You also have the option to opt-out of these cookies. But opting out of some of these cookies may affect your browsing experience.
Necessary Sempre abilitato
Necessary cookies are absolutely essential for the website to function properly. These cookies ensure basic functionalities and security features of the website, anonymously.
Functional
Functional cookies help to perform certain functionalities like sharing the content of the website on social media platforms, collect feedbacks, and other third-party features.
Performance
Performance cookies are used to understand and analyze the key performance indexes of the website which helps in delivering a better user experience for the visitors.
Analytics
Analytical cookies are used to understand how visitors interact with the website. These cookies help provide information on metrics the number of visitors, bounce rate, traffic source, etc.
Advertisement
Advertisement cookies are used to provide visitors with relevant ads and marketing campaigns. These cookies track visitors across websites and collect information to provide customized ads.
Others
Other uncategorized cookies are those that are being analyzed and have not been classified into a category as yet.
ACCETTA E SALVA